The road to AI – Investment dynamics in the European ecosystem

Roland Berger and France Digitale conducted desk research and built an original database that covers 28 European Union members plus Norway, Switzerland and Israel. France, Germany, the UK and Israel account for 80% of investments in AI startups from 2009 to 2019. As such, the following analysis will focus on these four countries, as the investments from elsewhere are too scant to draw relevant analysis from them.

The four leaders in terms of number of AI startups fund¬ed (the UK, France, Israel and Germany) attract 80% of the total amount of funds raised in this sector over the 2009-2019 period, representing USD 8.6 bn out of a total of approximately USD 10.8 bn in funds raised by AI startups.

Globally, investments in AI startups have been at¬tracting more and more funds since 2014, with a com¬pound annual growth rate of 55% for each country. 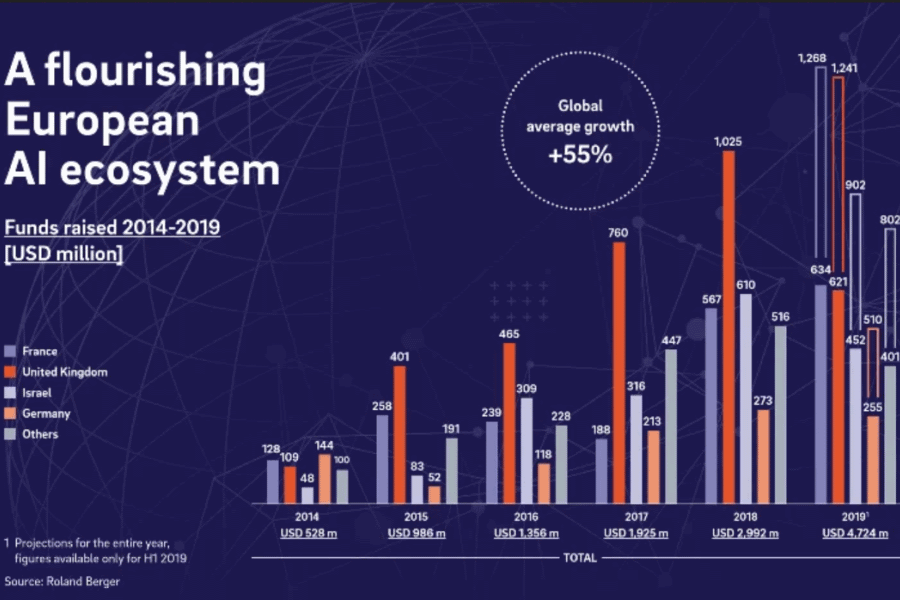 "The road to AI – Investment dynamics in the European ecosystem" reiterates the trend highlighted in our 2018 study (The 2018 study is available here : https://bit.ly/303LZpL). The European AI ecosystem, under the leadership of France, the UK and Germany, has experienced growth in the last five years, with the annual growth rate of funds raised by startups reaching 55% and France leading in investment attractiveness.

However, the European AI ecosystem is still fragmented and suffering from a lack of integration, which is further endangered by the scheduled Brexit on January 31, 2020.

That is why 2019 represents a milestone for the future of the unified European AI ecosystem. The newly appointed EU Commission, with its ambitious political roadmap, should seize the opportunity to design a favorable regulatory framework for the next decade, in sync with the European AI ecosystems.