German hospitals: The situation is more dramatic than ever (German only)

The situation in hospitals in Germany has never been as tense as it is today. The financial losses of the Corona crisis prevent urgently needed investments in the future. An easing of the situation is not in sight. On the contrary: more than half of the clinics are also expecting red numbers for the current year.

As part of the hospital study, Roland Berger regularly asks executives from the largest hospitals about their assessment of the current market situation, their strategic orientation and the prognoses for the future. However, the experts have never collated such poor results as this year: the financial situation has never been as tense as it is today and the study shows that the 600 hospital managers surveyed are more pessimistic than ever before.

Even private clinics in the red

The Covid pandemic and the resulting financial losses have plunged hospitals in Germany into a deep crisis. Every second house (49 percent) was in the red in 2020. While in the past at least private hospitals were able to resist losses, this dam now seems to be breaking: more than every third private hospital surveyed (38 percent) made losses in the past year. The situation at clinics under public law is even more tense: In this segment, around two out of three hospitals (63 percent) generate a deficit.

At the same time, the study shows that the outlook for future results is also deteriorating: Almost all hospitals - regardless of whether they are private or publicly funded - expect their economic situation to deteriorate over the next five years (83 percent). Temporary relief, for example through the Hospital Relief Act, provided a satisfactory liquidity reserve in the short term. After this regulation expires in the current year, the majority of hospital managers (52%) anticipate a dynamic decline in funds and corresponding pressure to act. 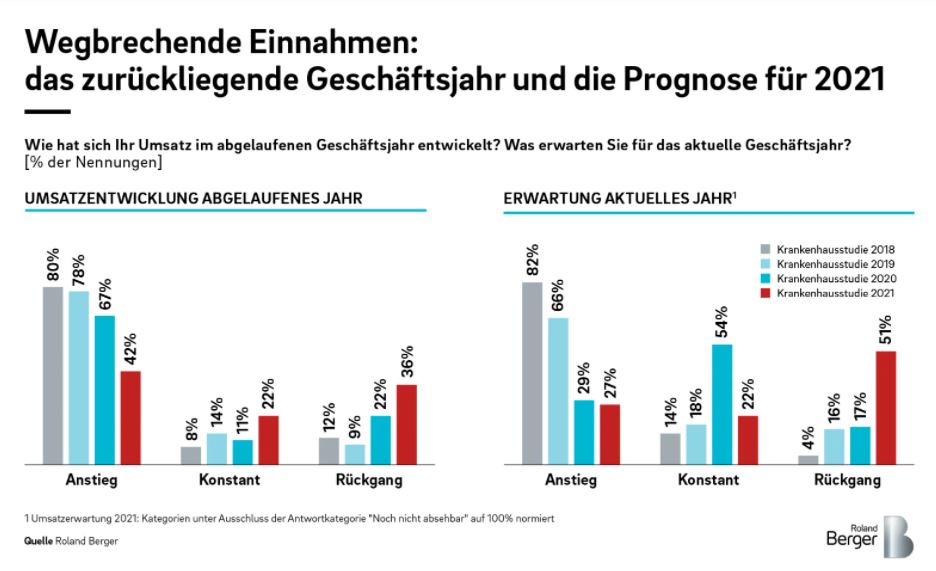 Many hospital managers no longer hope for the so-called rebound effect, i.e. catching up on the treatments and operations that have been postponed due to the Covid pandemic. In addition, the already high and rising costs for material and personnel are affecting hospital households.

According to the authors of the study, the sum of these developments could lead the focus away from strategically important decisions and investments towards short-term measures to improve results. The hospitals' enthusiasm for reform has fundamentally increased significantly - two out of three hospitals were in a phase of earnings improvement in 2020 - but the major issues of the future could be lost sight of. This applies in particular to the areas of digitization, shortage of skilled workers, infrastructure investments and sustainability.