Transatlantic solidarity is exactly what businesses on both sides of the Atlantic expect. This is one of the key findings of the Transatlantic Business Barometer 2022, which the American Chamber of Commerce (AmCham) conducted together with Roland Berger in spring 2022. The survey polled U.S. companies operating in Germany and German companies with business activities in the U.S. This year's Business Barometer was conducted shortly before and after the outbreak of the war in Ukraine, thus reflecting sentiment from the ever-worsening situation.

There is a need for action in German-U.S. trade and business relations. While only a minority on both sides of the Atlantic rate relations as bad or not so good, equally it is only a minority that rate transatlantic relations as good or very good. The majority of the companies consider relations to be neutral. This cannot be what the transatlantic partnership aspires to, and the findings should be seen as a clear mandate to policymakers in Europe and the U.S. to strive once more to reach a trade agreement. 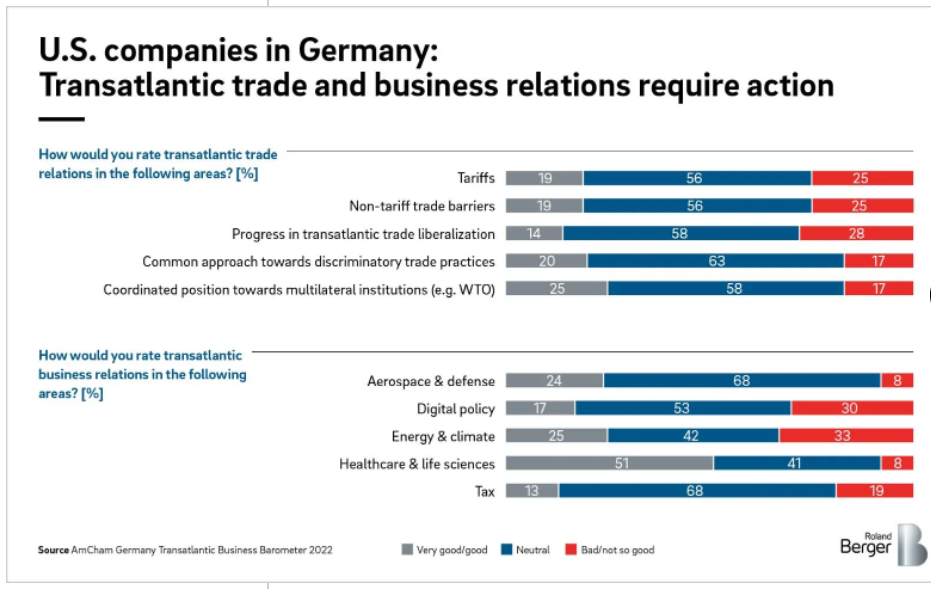 One area of particular importance for transatlantic business relations and for consumers and policymakers alike is digitalization . A Digital Transatlantic Economic Zone that also reduces trade barriers and harmonizes regulations in this area would give not only the digital industry but all economic sectors a lot more clout. The Business Barometer 2022 asked what companies would expect from such an economic zone.

A stronger joint transatlantic positioning is seen as the most important area of action on both sides of the Atlantic. For U.S. companies in Germany, this is followed by securing the transatlantic exchange of personal data and cooperation for more cybersecurity. German companies in the U.S., too, prioritize cooperation for more cybersecurity, followed by trustworthiness as a regulatory standard. 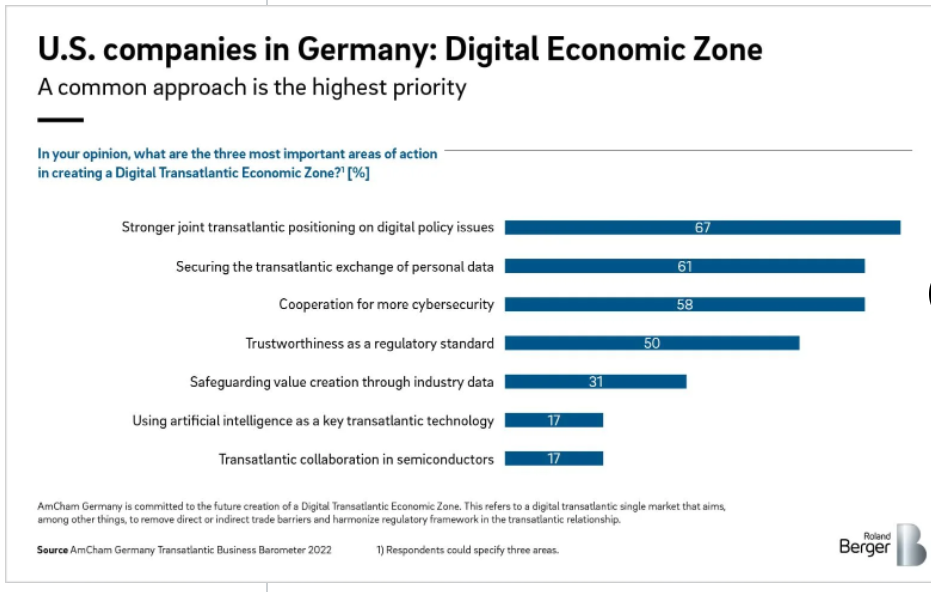 Positive expectations for this year

In addition to transatlantic relations, the Business Barometer 2022 surveyed companies' business expectations and their view of the partner country as a business location. Looking at business expectations, companies are optimistic in spite of the situation in Ukraine and its impact on the global economy. Fully 90% of U.S. companies in Germany and 78% of German companies in the U.S. expect to increase their revenue in the partner country this year. Many firms are also confident about increasing their investments and number of employees.

Need for reform in Germany

The U.S. scores better than Germany in the countries' respective rating as a business location. A total of 78% of German companies rate the U.S. as a very good or good business location, while only 59% of U.S. companies say the same for Germany. However, Germany scores very highly on quality of employees, potential as a sales market and quality of R&D. Germany displays some shortcomings in quality of digital infrastructure, corporate taxation, labor costs and energy costs. With the exception of labor costs, these are all aspects on which the U.S. scores highly. The Business Barometer thus confirms the points that have long been criticized by business and consumers in Germany. The need for reform to overcome Germany's shortcomings has been recognized, and policymakers are now called upon to implement the reforms swiftly.

Quick survey on the impact of the war in Ukraine

Based on the latest geopolitical developments, especially due to the Russian war against Ukraine, the American Chamber of Commerce in Germany has conducted a flash poll among its member companies. Members of AmCham Germany are representatives of German, American and other international companies. The flash poll took place between 23 and 31 March 2022 and is based on the responses of 267 company representatives. 65% German companies, 28% US companies and 7% other companies participated.